You are here: Home / Artists / What has Parkscape Done for Cabbagetown? 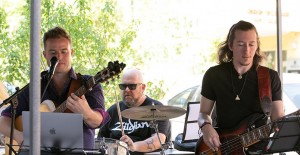 Contributed byAnita Bostok and Norman Hathaway. As summer draws to a close, so will Parliament Street’s widely publicized, Parkscape. The question is, did the temporary park add value to the neighbourhood in the eyes of the residents? As Cabbagetown realtors and residents, we set out to find the answer.

According to Virginia Gallop, executive director of the Cabbagetown Business Improvement Area, the Parkscape project began with an initial push from former Councillor and MPP Kristyn Wong-Tam and a grant application from former BIA director Rick Matthews. The idea was to give local businesses a post-pandemic boost and to give us Cabbagetowners a nice place to gather outdoors during the summer months. The lush green space was created as part of the Living Streets Program by Bienenstock Natural Playgrounds and was funded entirely by real estate developers Centrecourt and Fitzrovia. To the delight of the locals, Bienenstock meticulously cultivated the greenery and maintained the space throughout the summer.

While many locals looked forward to the project, others were skeptical that the comfortable outdoor gathering areas would attract loiterers and those looking to wreak havoc. But this never happened. Some speculate that the added security in the area deterred those who might abuse the space, but others believe the serenity of the natural environment is what brought calm.

The BIA organized a calendar of daily events and hosted regular concerts twice a week with performances ranging from classical cello, flamenco, accordion, music bands, and singers. One of the main draws has been the Toronto All-Star Big Band, whose crowds have grown bigger with each appearance. Businesses such as Meridian Bank, The Great Mallard, and Timeless Collective all found creative ways of using the spaces while increasing their presence on Parliament St.

But the BIA was careful not to ‘over program’ allowing time for people to use the city oasis in a relaxed fashion. Folks took the opportunity to sit and read, sometimes chatting with friends while awaiting a pizza, and children played nearby. It also gave openings for impromptu gatherings and jam sessions. And while the summer was well planned, the weather threw a few curve balls. One example is the time a wonderful trombonist’s performance was canceled due to an impending thunderstorm that never occurred.

The overwhelming response to the project was positive, with many locals saying they loved having the additional green space and took full advantage of the project. But others were frustrated by the increased traffic congestion and the diminished number of parking spaces in the shopping corridor. This element created challenges both for merchants and their customers. The BIA did offer waivers for businesses to conduct business on the sidewalk without a permit, and some merchants found other ways of keeping customers satisfied, such as by providing free deliveries.

The residents of Cabbagetown have been drawn to the area by the beautiful Victorian homes, picturesque gardens, outstanding parks, and of course, the friendly neighbours. In assessing what it has meant to Cabbagetown, Parkscape has added to the charm and is another example of why our neighbourhood is cherished.

If you haven’t yet taken the time to enjoy Parkscape, it’s not too late. Check out the Cabbagetown BIA website to find the programme schedule. Many performances and pop-up sales remain before it all wraps up. Sunday, September 11th, will be the final day with live performances from 11:00 am to 8:00 pm. Parliament Street will be closed, creating a festive promenade. Hope to see you there!

How many holiday editions is this now?? Twelve to be precise. The last two, amid pandemics, have been interesting. We did the giving guide last year, and this year did not get the content or … END_OF_DOCUMENT_TOKEN_TO_BE_REPLACED

The souls of the departed and ghost of Christmas past don’t just cease to exist. Their ectoplasm still gather amongst the homes and commercial establishments of Cabbagetown. They still convene in the … END_OF_DOCUMENT_TOKEN_TO_BE_REPLACED

Contributed by Anita Bostok. As Cabbagetown residents, we know full well the advantages of downtown living. We walk down the street, and everything we need is at our fingertips. But we can’t take it … END_OF_DOCUMENT_TOKEN_TO_BE_REPLACED

Contributed by: Tony Lafazanis – Cabbagetown Personal Injury Lawyer  www.TLLawCanHelp.com If you’ve found yourself asking this question, you are likely in a situation where you could benefit from … END_OF_DOCUMENT_TOKEN_TO_BE_REPLACED

Contributed by Peter Lovering, Former Candidate for City Council in Ward 11 University-Rosedale. I did, and quite frankly, running was a great deal of fun. I knew I was in tough and I loved every … END_OF_DOCUMENT_TOKEN_TO_BE_REPLACED

Thank you to my fellow candidates and you , as residents, for your commitment to the election process and being engaged. It is people like you who give me hope for all we can accomplish together and … END_OF_DOCUMENT_TOKEN_TO_BE_REPLACED

Cabbagetowner Ari Korkodilos had another amazing kart racing season in 2022. Ari won the first national Motormaster Mosport race in May, going from last to first, as well as the final national … END_OF_DOCUMENT_TOKEN_TO_BE_REPLACED

Cabbagetown is a neighbourhood of beauty, heritage, cultural diversity and inclusion. We are Anita Bostok and Norman Hathaway and we’re proud to contribute this regular feature where you get to know … END_OF_DOCUMENT_TOKEN_TO_BE_REPLACED

Danny, a 13-year-old volunteer, sat at one of a handful of tables on the lower floor of Holy Blossom Temple, sandwiched between his father and older brother, cutting fringes into a large swath of felt … END_OF_DOCUMENT_TOKEN_TO_BE_REPLACED

“We can do better” - Candidate for City Councillor Ward 13 - Toronto - Center Caroline Murphy In September, I wrote about why I was running to be your City Councillor for Ward 13 and since then, I … END_OF_DOCUMENT_TOKEN_TO_BE_REPLACED

Thank you to everyone who came out to enjoy the Cabbagetown Art and Crafts show this year.  The weather Gods were on our side and the sun was shining!  Randy Brown, Founder of the show started things … END_OF_DOCUMENT_TOKEN_TO_BE_REPLACED

My Betty White Photo credits Marion Voysey Betty White– is a visual artist, living and working in downtown Toronto. Born in the US, Betty studied painting and, for a period, paper making, in a … END_OF_DOCUMENT_TOKEN_TO_BE_REPLACED

Contributed by Anita Bostok - After a soft opening last summer, L’Avenue restaurant at 583 Parliament Street is now creating quite a buzz. Taking inspiration from the chic cafes and brasseries she … END_OF_DOCUMENT_TOKEN_TO_BE_REPLACED

I am running for city council in ward 11, and I have noticed dozens of things that can be done to make elections more fair and equitable. In Ward 11, we don’t have an incumbent; however, like most … END_OF_DOCUMENT_TOKEN_TO_BE_REPLACED

“I have gone past this building so many times but never tried the door until now,” exclaim college students walking into Gallery Arcturus, in a state of mild shock at the abundance of colour and … END_OF_DOCUMENT_TOKEN_TO_BE_REPLACED