You are here: Home / Business / GETTING TO KNOW YOU

Cabbagetown is a neighbourhood of beauty, heritage, cultural diversity and inclusion. We are Anita Bostok and Norman Hathaway and we’re proud to contribute this regular feature where you get to know the people and businesses that make Cabbagetown so special. If you’d like to be featured or would like to nominate someone please get in touch. 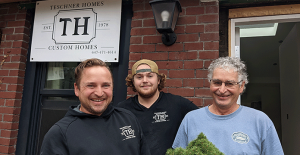 Mike Teschner – Building, renovating, restoring, and repairing homes in Cabbagetown is a family affair for Mike Teschner. Mike is the son of Peter Teschner, who immigrated with his family to Ontario from Germany during the Second World War. Peter worked as a tile setter until he could afford his first lot in the Markham and Ellesmere area of Scarborough in 1964, where he built his first home.

Growing up in Scarborough, Mike worked as a carpenter during his high school summer months. In his early 20s, he had joined the Boiler Maker Union making a living as a steel inspector. By the 1980s, Mike was building homes with his dad Peter. Raising a family during this time, he engaged 2 of his sons to join in. Josh and Jonathan started to learn the skills of framing a structure with their dad coming out of high school. Learning the trades, they integrated into the business and added to their grandfather’s strong legacy of skilled craftwork.

In the early 2000s, Mike started working for a local construction company that was very active in downtown Toronto and Cabbagetown. Before long, Teschner Homes had developed an excellent reputation in the area.

Josh is now married with twins and a 7-year-old. Who knows, perhaps there’s a budding prodigy to carry on the legacy? Patriarch Peter still lives in his original house in Scarborough. The families love to get together and spend their downtime cottaging, fishing, and sailing. 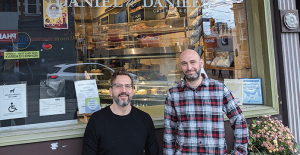 David and Guillaume are managing partners of Daniel et Daniel Catering and Events at 248 Carlton St. Their story is a family affair. Created 42 years ago by Daniel Clairet and Daniel Megly, Daniel et Daniel has become part of the bedrock of the Cabbagetown Community. Looking for succession and continuation of the business, the partners needed to look no further than their own family. Guillaume is the son of Daniel Clairet and David Stratton is Daniel’s son in law. David developed strong management skills through his education from University of Western Ontario, coaching and leading high performance athletes as well as marketing experience with Molson, Thomson, and Nelson. Guillaume acquired business degrees from Sheridan College and the University of Ottawa. He later went overseas to China honing his skills in the areas of logistics and business operations. When the time came for succession, the choice was obvious. With his extensive business management experience, Guillaume joined as general manager in 2015 and with his skills in marketing and leading high performance teams, David joined the following year.

The team believes in the symbiotic relationship that exists between a business and its community. That belief has been the foundation of the strong sense of culture, community, and sense of belonging that Daniel et Daniel has with Cabbagetown. Both David and Guillaume are proud to continue to foster this relationship and feel that Cabbagetown is fundamental to their identity. Along with their family, they are deeply grateful for the community support that started 42 years ago and continues to this day.

How many holiday editions is this now?? Twelve to be precise. The last two, amid pandemics, have been interesting. We did the giving guide last year, and this year did not get the content or … END_OF_DOCUMENT_TOKEN_TO_BE_REPLACED

The souls of the departed and ghost of Christmas past don’t just cease to exist. Their ectoplasm still gather amongst the homes and commercial establishments of Cabbagetown. They still convene in the … END_OF_DOCUMENT_TOKEN_TO_BE_REPLACED

Contributed by Anita Bostok. As Cabbagetown residents, we know full well the advantages of downtown living. We walk down the street, and everything we need is at our fingertips. But we can’t take it … END_OF_DOCUMENT_TOKEN_TO_BE_REPLACED

Contributed by: Tony Lafazanis – Cabbagetown Personal Injury Lawyer  www.TLLawCanHelp.com If you’ve found yourself asking this question, you are likely in a situation where you could benefit from … END_OF_DOCUMENT_TOKEN_TO_BE_REPLACED

Contributed by Peter Lovering, Former Candidate for City Council in Ward 11 University-Rosedale. I did, and quite frankly, running was a great deal of fun. I knew I was in tough and I loved every … END_OF_DOCUMENT_TOKEN_TO_BE_REPLACED

Thank you to my fellow candidates and you , as residents, for your commitment to the election process and being engaged. It is people like you who give me hope for all we can accomplish together and … END_OF_DOCUMENT_TOKEN_TO_BE_REPLACED

Cabbagetowner Ari Korkodilos had another amazing kart racing season in 2022. Ari won the first national Motormaster Mosport race in May, going from last to first, as well as the final national … END_OF_DOCUMENT_TOKEN_TO_BE_REPLACED

Cabbagetown is a neighbourhood of beauty, heritage, cultural diversity and inclusion. We are Anita Bostok and Norman Hathaway and we’re proud to contribute this regular feature where you get to know … END_OF_DOCUMENT_TOKEN_TO_BE_REPLACED

Danny, a 13-year-old volunteer, sat at one of a handful of tables on the lower floor of Holy Blossom Temple, sandwiched between his father and older brother, cutting fringes into a large swath of felt … END_OF_DOCUMENT_TOKEN_TO_BE_REPLACED

“We can do better” - Candidate for City Councillor Ward 13 - Toronto - Center Caroline Murphy In September, I wrote about why I was running to be your City Councillor for Ward 13 and since then, I … END_OF_DOCUMENT_TOKEN_TO_BE_REPLACED

Thank you to everyone who came out to enjoy the Cabbagetown Art and Crafts show this year.  The weather Gods were on our side and the sun was shining!  Randy Brown, Founder of the show started things … END_OF_DOCUMENT_TOKEN_TO_BE_REPLACED

My Betty White Photo credits Marion Voysey Betty White– is a visual artist, living and working in downtown Toronto. Born in the US, Betty studied painting and, for a period, paper making, in a … END_OF_DOCUMENT_TOKEN_TO_BE_REPLACED

Contributed by Anita Bostok - After a soft opening last summer, L’Avenue restaurant at 583 Parliament Street is now creating quite a buzz. Taking inspiration from the chic cafes and brasseries she … END_OF_DOCUMENT_TOKEN_TO_BE_REPLACED

I am running for city council in ward 11, and I have noticed dozens of things that can be done to make elections more fair and equitable. In Ward 11, we don’t have an incumbent; however, like most … END_OF_DOCUMENT_TOKEN_TO_BE_REPLACED

“I have gone past this building so many times but never tried the door until now,” exclaim college students walking into Gallery Arcturus, in a state of mild shock at the abundance of colour and … END_OF_DOCUMENT_TOKEN_TO_BE_REPLACED