You are here: Home / Artists / mysteries to discover within the walls of this unexpected art sanctuary 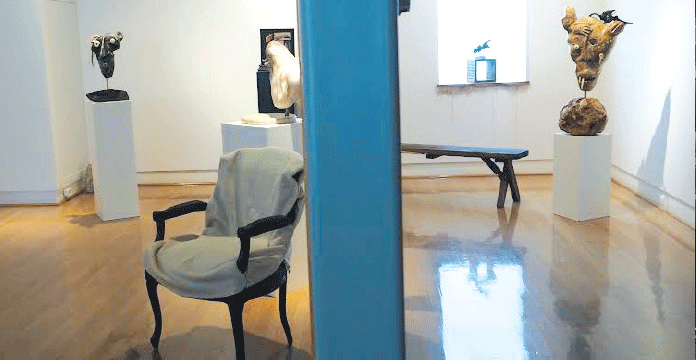 “I have gone past this building so many times but never tried the door until now,” exclaim college students walking into Gallery Arcturus, in a state of mild shock at the abundance of colour and unexpected artworks visible in the first room they see. For them it’s as if a four-storey art museum suddenly and mysteriously appeared across from campus — except it has just passed its quarter century mark welcoming visitors on Gerrard Street East between Mutual and Church Streets.

Whatever prompts a student of Ryerson, now Toronto Metropolitan University, to finally look up from a computer monitor and become curious about their downtown surroundings, they often act as if gently woken up.

It’s not uncommon to see a young person snapping a selfie against the cloth artwork which hangs on the museum’s otherwise imposing black doorway, and then not dare to try the door handle. Is it perhaps that exploring the unknown requires some bit of bravery not taught in class?

Now imagine the delight expressed by Cabbagetowners who after years, or perhaps more than a decade, of admiring this vintage building from the sidewalk finally realize it is open to the public — and yet they too have never been inside.

As condo towers press in on any remaining downtown heritage structures which are not safely ensconced in neighbourhoods, this row of former houses along Gerrard Street just two blocks from Allan Gardens increasingly stands out. Architecture fans ought to be particularly on alert for this four-floor art museum that book-ends a set of matching bay-windowed, yellow and red brick walk-ups running to the edge of Church Street, several of which offer double storefronts on the first and second levels.

The businesses inhabiting these old rowhomes seem as if just coming back to life after a difficult few years. Restaurants and a cafe hope to attract patrons back, including those who may cling to apprehensions learned during the pandemic about going inside shared public spaces.

Passing through the glassed vestibule of Gallery Arcturus, a moment is required to recognize the possible extent of exhibit spaces beyond the first one. Another repeated exclamation from guests is how much larger the building seems inside than out.

What does become clear is that the exhibit galleries inhabit rooms — and staircases — of an old house which was eventually joined to its neighbouring home. The address now known as 80 Gerrard Street East was born as a pair of fine residences – built for two brothers and their families in 1858. Anson Green, Reverend, and Columbus H. Green, Barrister, moved in when woods and farmed fields were probably a few (muddy) steps away. Their homes were poised at the top of then-Dalhousie Street and the town lay down a gentle slope from their front steps.

Upstairs from the bay window of Gallery Arcturus visitors to the art library can squint and make out the blue-green steeple of St James Cathedral as it is slowly encircled by looming towers and construction cranes.

While still gazing south, lovers of art history can imagine the spot across the road where Group of Seven painter Lawren Harris placed himself as he chose #80 as the subject for his 1912 work, “Houses, Gerrard Street”.

Back inside the plant-filled library, guests can sit in red chairs both soft or firm and explore art books from all genres. In doing so they will need to take care of sculptures placed on tables all around, and when ready take in the paintings hanging on the walls. All work is chosen by artistic director deborah harris, who by serendipity but not relation has the same name as the painter of a century before.

Next, move to the adjoining Collage Gallery that features work made in the museum itself, often intertwined with unusual objects and unorthodox display material.

The ongoing mystery of exploration continues in the upper reaches of an art-filled stairwell as well as the third floor “Drawing Room” and “Dark Room”.

Lastly, visitors can tread carefully down to the basement studio; a working space where much of the art exhibited onsite originates. If the timing is right one can be among artists fashioning new collages or printing cards and booklets about the works just seen on the floors above.

An anomaly of this museum – there are quite a few of these – is how the exhibits are often put up during opening hours. Visitors may pass through a room deliberately left empty as curator harris waits for the space itself to indicate what art will work – and what won’t at that moment in time.

Pieces are chosen from the permanent collection or may be created especially. Visitors may come upon artists painting, hanging new works or even be asked for their impressions of a new installation. All while the galleries remain open for viewing.

Currently on display is a retrospective of work by Floyd Kuptana, a multi-discipline artist who began his work in the Inuit stone carving tradition before moving to Toronto almost three decades ago and later bringing his unique figures and shapes into paint and pastel.

Kuptana’s death a year ago prompted the artistic director and her assistant Sae Kimura to publish a three-part series of books on his wide range of work. When approached by a long-time collaborator of Kuptana’s to exhibit sculpture from his personal collection, the gallery arranged to show these never-exhibited pieces along with work by the artist from the gallery’s permanent collection.

There are more mysteries to discover within the walls of this unexpected art sanctuary just blocks from Parliament Street — but it’s going to require coming up those first ten steps and walking through the big black doorway.

How many holiday editions is this now?? Twelve to be precise. The last two, amid pandemics, have been interesting. We did the giving guide last year, and this year did not get the content or … END_OF_DOCUMENT_TOKEN_TO_BE_REPLACED

The souls of the departed and ghost of Christmas past don’t just cease to exist. Their ectoplasm still gather amongst the homes and commercial establishments of Cabbagetown. They still convene in the … END_OF_DOCUMENT_TOKEN_TO_BE_REPLACED

Contributed by Anita Bostok. As Cabbagetown residents, we know full well the advantages of downtown living. We walk down the street, and everything we need is at our fingertips. But we can’t take it … END_OF_DOCUMENT_TOKEN_TO_BE_REPLACED

Contributed by: Tony Lafazanis – Cabbagetown Personal Injury Lawyer  www.TLLawCanHelp.com If you’ve found yourself asking this question, you are likely in a situation where you could benefit from … END_OF_DOCUMENT_TOKEN_TO_BE_REPLACED

Contributed by Peter Lovering, Former Candidate for City Council in Ward 11 University-Rosedale. I did, and quite frankly, running was a great deal of fun. I knew I was in tough and I loved every … END_OF_DOCUMENT_TOKEN_TO_BE_REPLACED

Thank you to my fellow candidates and you , as residents, for your commitment to the election process and being engaged. It is people like you who give me hope for all we can accomplish together and … END_OF_DOCUMENT_TOKEN_TO_BE_REPLACED

Cabbagetowner Ari Korkodilos had another amazing kart racing season in 2022. Ari won the first national Motormaster Mosport race in May, going from last to first, as well as the final national … END_OF_DOCUMENT_TOKEN_TO_BE_REPLACED

Cabbagetown is a neighbourhood of beauty, heritage, cultural diversity and inclusion. We are Anita Bostok and Norman Hathaway and we’re proud to contribute this regular feature where you get to know … END_OF_DOCUMENT_TOKEN_TO_BE_REPLACED

Danny, a 13-year-old volunteer, sat at one of a handful of tables on the lower floor of Holy Blossom Temple, sandwiched between his father and older brother, cutting fringes into a large swath of felt … END_OF_DOCUMENT_TOKEN_TO_BE_REPLACED

“We can do better” - Candidate for City Councillor Ward 13 - Toronto - Center Caroline Murphy In September, I wrote about why I was running to be your City Councillor for Ward 13 and since then, I … END_OF_DOCUMENT_TOKEN_TO_BE_REPLACED

Thank you to everyone who came out to enjoy the Cabbagetown Art and Crafts show this year.  The weather Gods were on our side and the sun was shining!  Randy Brown, Founder of the show started things … END_OF_DOCUMENT_TOKEN_TO_BE_REPLACED

My Betty White Photo credits Marion Voysey Betty White– is a visual artist, living and working in downtown Toronto. Born in the US, Betty studied painting and, for a period, paper making, in a … END_OF_DOCUMENT_TOKEN_TO_BE_REPLACED

Contributed by Anita Bostok - After a soft opening last summer, L’Avenue restaurant at 583 Parliament Street is now creating quite a buzz. Taking inspiration from the chic cafes and brasseries she … END_OF_DOCUMENT_TOKEN_TO_BE_REPLACED

I am running for city council in ward 11, and I have noticed dozens of things that can be done to make elections more fair and equitable. In Ward 11, we don’t have an incumbent; however, like most … END_OF_DOCUMENT_TOKEN_TO_BE_REPLACED

“I have gone past this building so many times but never tried the door until now,” exclaim college students walking into Gallery Arcturus, in a state of mild shock at the abundance of colour and … END_OF_DOCUMENT_TOKEN_TO_BE_REPLACED