You are here: Home / Community / The Toronto International Festival of Authors By Jesse Cohoon with material provided by Courtney Greenberg 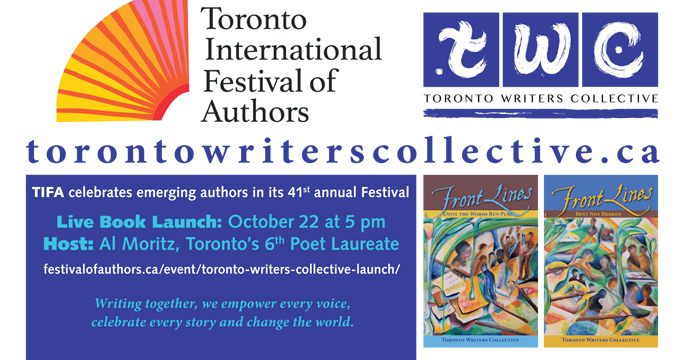 By Jesse Cohoon with material provided by Courtney Greenberg. The Toronto International Festival of Authors (TIFA), Canada’s largest and longest-running literary festival, will take place October 22 – November 1, 2020, and deliver more than 200 virtual events and activities, primarily for free and accessible from around the world.
It celebrates emerging authors in one of the first events of the 41st annual Festival by featuring 6 authors from two new anthologies in a live event on October 22 at 5 pm, hosted by Al Moritz, Toronto’s 6th Poet Laureate. https://festivalofauthors.ca/event/toronto-writers-collective-launch/
The writers were mentored by professional authors in a 10-week series of workshops held by the Toronto Writers Collective, an organization dedicated to encouraging voices from diverse communities. They will read excerpts of pieces they created, exploring themes of poverty, homelessness, family, grief and courage.
“The TWC is thrilled and honoured to launch our two inspiring anthologies at the Toronto International Festival of authors,” says Susan Turk Mozer, Founder of the TWC. “It is a privilege for our writers to present in the company of some of the World’s best-known authors and thinkers. We are proud of Al Mortiz’s support, in celebrating these once unheard stories”.
In total, 34 authors contributed to the anthologies, Front Lines: Bent, Not Broken and Front Lines: Until the Words Run Pure. The workshops offered them a space to be brave and vulnerable, develop their skills and receive feedback on their writing from professional authors.
“The Toronto Writers Collective does wonderful, crucial work by nurturing the writer hidden in so many people who were never allowed to believe they have a voice,” says Al Moritz, Toronto’s poet laureate. “I’m proud to work with TIFA, and with TWC in its creative, soul-strengthening outreach through writing to our most vulnerable people…our greatest untapped resource!”
The project was funded by the Ontario Trillium Foundation, Ontario Arts Council, Toronto Arts Council and the Azrieli Foundation and supported by the Toronto Public Library branches and Working for Change.
This marks the second time the Toronto Public Library has played a role in the publication of a TWC anthology. The first, Front Lines Series: Voices from the Toronto Writers Collective, was published in 2017. It shares the stories of 23 emerging authors.
“This is a perfect example of how the library’s spaces, collections and staff can add great value to these kinds of partnerships. Toronto Public Library is happy to support TWC in bringing this initiative to our branches, and to Torontonians wishing to express themselves through creative writing,” Toronto Public Library Director of Service Development & Innovation Pam Ryan says, adding that the resulting anthologies are an “impactful and thought-provoking collection of creativity.”
TIFA is is also supporting the TWC by connecting it with Union Station. A video installation of excerpts exploring the idea of ‘Where I’m From’ will be presented at Union Station throughout the Festival.
“Representing all the voices of Toronto is a vital part of the Toronto International Festival of Authors,” explained Roland Gulliver, Director, Toronto International Festival of Authors.,
“I am really excited for our installation at Union Station. It offers the TWC writers the opportunity to see their writing screened in the heart of city – especially when not everyone has easy access to digital resources- and it offers audiences a different way to access stories and engage with digital content in our everyday environments.”

Event: https://festivalofauthors.ca/event/toronto-writers-collective-launch/
The anthologies can be purchased through the Toronto Writers Collective’s website: www.torontowriterscollective.ca or borrowed from your local Library branch.

How many holiday editions is this now?? Twelve to be precise. The last two, amid pandemics, have been interesting. We did the giving guide last year, and this year did not get the content or … END_OF_DOCUMENT_TOKEN_TO_BE_REPLACED

The souls of the departed and ghost of Christmas past don’t just cease to exist. Their ectoplasm still gather amongst the homes and commercial establishments of Cabbagetown. They still convene in the … END_OF_DOCUMENT_TOKEN_TO_BE_REPLACED

Contributed by Anita Bostok. As Cabbagetown residents, we know full well the advantages of downtown living. We walk down the street, and everything we need is at our fingertips. But we can’t take it … END_OF_DOCUMENT_TOKEN_TO_BE_REPLACED

Contributed by: Tony Lafazanis – Cabbagetown Personal Injury Lawyer  www.TLLawCanHelp.com If you’ve found yourself asking this question, you are likely in a situation where you could benefit from … END_OF_DOCUMENT_TOKEN_TO_BE_REPLACED

Contributed by Peter Lovering, Former Candidate for City Council in Ward 11 University-Rosedale. I did, and quite frankly, running was a great deal of fun. I knew I was in tough and I loved every … END_OF_DOCUMENT_TOKEN_TO_BE_REPLACED

Thank you to my fellow candidates and you , as residents, for your commitment to the election process and being engaged. It is people like you who give me hope for all we can accomplish together and … END_OF_DOCUMENT_TOKEN_TO_BE_REPLACED

Cabbagetowner Ari Korkodilos had another amazing kart racing season in 2022. Ari won the first national Motormaster Mosport race in May, going from last to first, as well as the final national … END_OF_DOCUMENT_TOKEN_TO_BE_REPLACED

Cabbagetown is a neighbourhood of beauty, heritage, cultural diversity and inclusion. We are Anita Bostok and Norman Hathaway and we’re proud to contribute this regular feature where you get to know … END_OF_DOCUMENT_TOKEN_TO_BE_REPLACED

Danny, a 13-year-old volunteer, sat at one of a handful of tables on the lower floor of Holy Blossom Temple, sandwiched between his father and older brother, cutting fringes into a large swath of felt … END_OF_DOCUMENT_TOKEN_TO_BE_REPLACED

“We can do better” - Candidate for City Councillor Ward 13 - Toronto - Center Caroline Murphy In September, I wrote about why I was running to be your City Councillor for Ward 13 and since then, I … END_OF_DOCUMENT_TOKEN_TO_BE_REPLACED

Thank you to everyone who came out to enjoy the Cabbagetown Art and Crafts show this year.  The weather Gods were on our side and the sun was shining!  Randy Brown, Founder of the show started things … END_OF_DOCUMENT_TOKEN_TO_BE_REPLACED

My Betty White Photo credits Marion Voysey Betty White– is a visual artist, living and working in downtown Toronto. Born in the US, Betty studied painting and, for a period, paper making, in a … END_OF_DOCUMENT_TOKEN_TO_BE_REPLACED

Contributed by Anita Bostok - After a soft opening last summer, L’Avenue restaurant at 583 Parliament Street is now creating quite a buzz. Taking inspiration from the chic cafes and brasseries she … END_OF_DOCUMENT_TOKEN_TO_BE_REPLACED

I am running for city council in ward 11, and I have noticed dozens of things that can be done to make elections more fair and equitable. In Ward 11, we don’t have an incumbent; however, like most … END_OF_DOCUMENT_TOKEN_TO_BE_REPLACED

“I have gone past this building so many times but never tried the door until now,” exclaim college students walking into Gallery Arcturus, in a state of mild shock at the abundance of colour and … END_OF_DOCUMENT_TOKEN_TO_BE_REPLACED